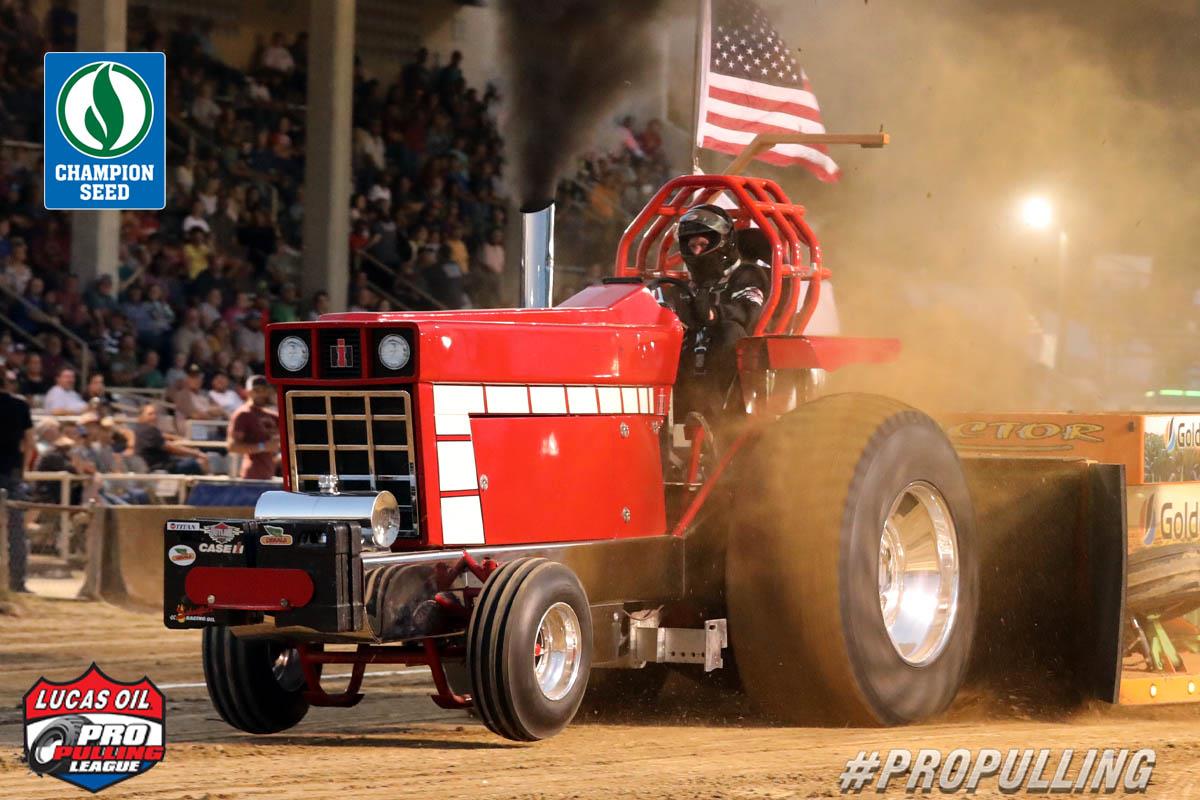 Charlestown, IN (September 19, 2022) – Cape Girardeau, Missouri is home to the SEMO District Fair that welcomes thousands of fans each year. The Champion Seed Western Series was part of this exceptional event on Friday September 16th with four great classes of action. As the last event of the season, three of the four classes would not only declare event winners but also class champions.

The packed grandstands saw the 85 Limited Pro Stocks get the evening going with a dozen competitors and their machines answering the call. Andrew Toelke was first hook for the class on the RhinoAg X-Factor sled with the Wife’s Nightmare 66-series IH. Toelke’s run of 333.85 would stand for the evening garnering him the win with Michael Niemeyer and the Pickney Bottom Deere finishing second and Esdon Bartling and the Ridin Dirty IH in third. Chris Bates would claim the 2022 points title pulling The Unknown IH, finishing eighth at Cape.

Following the 85 Limited Pros was a small but potent group of Limited Pro Stock Diesel Trucks. Jason Wayman drove the Megatron Dodge not only to the win but to the 2022 class points title on his 312 foot blast. Craig McElfresh and the 8 Envy Chevy would finish in second while Skyler Leeper and the Legal Limits Dodge would finish third.

Six excellent Super Modified Two Wheel Drive competitors hit the track at the SEMO Fairgrounds with Andrew Sprock and the Maximum Ride Dodge making a crowd-thrilling pass beyond 340 feet for the win. Second place went to the Cornfield Cruiser-Blackout T-Bucket of Russell Phipps and David Barnett would wheel the Second Chance T-Bucket into third. Another T-Bucket, the Flatland Thunder machine of Shane Startcher would finish fourth, clinching the points title for the Kansas-based man and machine.

Completing the evening were the bruising 95 Limited Pro Stock Tractors. Adrian Cox and the Hickory Hooker IH were winners on the evening, solidifying their hold on the points lead. Brennan Begeman (second place in the 2022 points race) piloted the Change of Pace IH on this occasion with a second place distance just a foot behind Cox. Third would go to the Lil 2 Tuff Deere of John Osborn.

Congratulations to Chris Bates, Jason Wayman and Shane Startcher on their season championships; the 95 Limited Pro Stock title will be decided this weekend on Friday September 23rd during the Pro Pulling Nationals at the Lucas Oil Speedway in Wheatland, Illinois. Follow our social media accounts for more information on this exciting event!