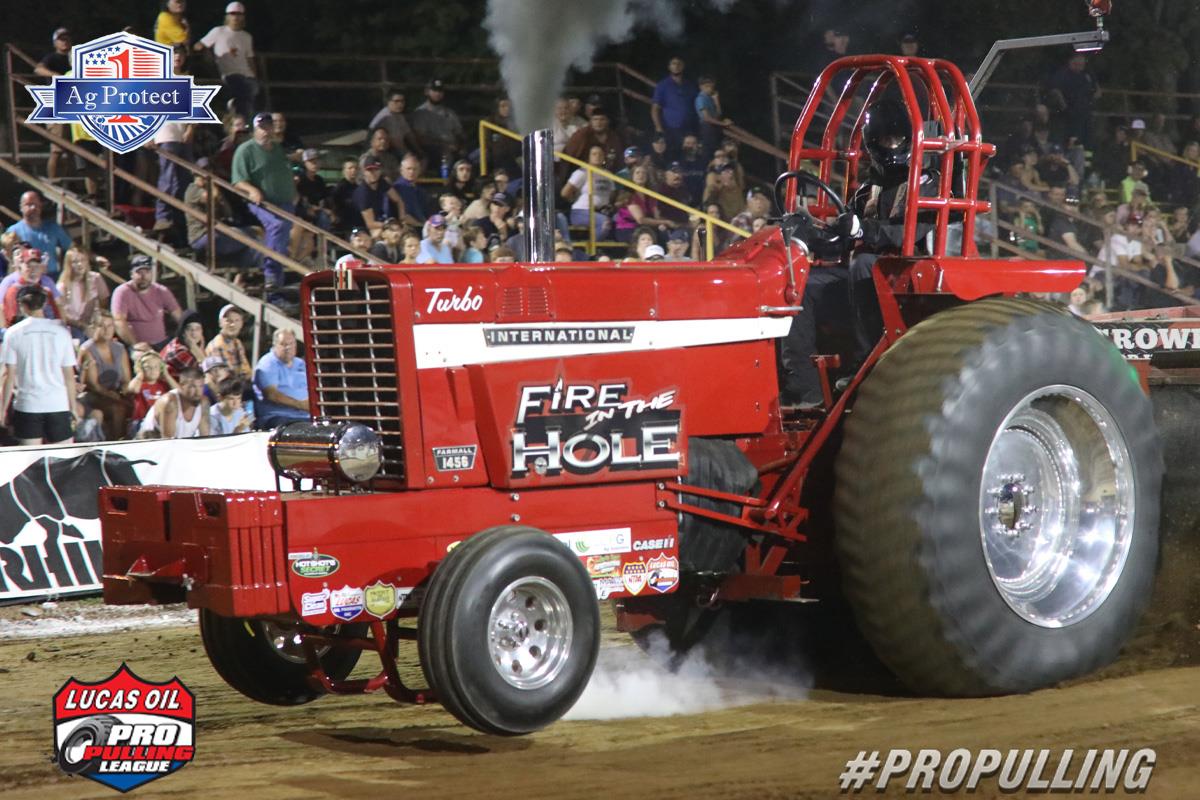 Charlestown, IN (September 12, 2022) – The 41st edition of the Lanesville Heritage Weekend Truck and Tractor Pull was held across three days, September 8th through the 10th. An abundance of pulling came from antiques, farm stocks and other local classes with four classes from the Lucas Oil Pro Pulling League headlining on the evenings of the 9th and 10th. The facility as usual was packed full of pulling fans for the evening sessions.

In that first session on Friday the 9th the competition kicked off with three classes from the Ag Protect 1 Midwest Region. Hot Farms were first to test the Southern Express sled with twenty entries. Mike Robbins took an early hook to the win on the Fire in the Hole IH. Next, Limited Pro Stock Diesel Trucks roared onto the track featuring fifteen combatants. The leadoff puller, Tim Tuttle piloting the Common Cents Dodge, set the mark to beat and held off the 14 other shots at his leading distance for the win. Completing the Midwest Region contingent was a great crowd of Pro Stock 4x4 Trucks. Luke Thomas and his Legion Chevy S10 would find victory in that class on the next-to-last hook. The Silver Series was represented in Lanesville by the high-flying and fast-paced Light Pro Stock Tractor division. Evan Smoot guided his sharp Deere named Barnyard Bandit to the top spot on the fourth hook of competition, besting the efforts of 11 top flight entries to complete the PPL action for the evening.

The Saturday session kicked off 30 minutes early to beat rain forecasted later in the night. Light Pro Stocks started the evening and were led by Jeff Mikloiche and the Demented CaseIH; Adam Kron and the Runnin Behind Dodge took the Limited Pro Stock Diesel win on their only hook for the weekend at Lanesville; Brad Chamberlain was victorious in the Pro Stock 4x4 class in the Barely Getting By Chevy on a late hook, which also secured his 2022 points title; and in Hot Farm action, Calvin Robbins’ gamble to drop his first hook paid off big, sweeping the weekend on the Fire in the Hole IH in Hot Farm.

The 2022 season is complete for these four divisions in the Lucas Oil Pro Pulling League; stay tuned as we highlight the points champions in coming days at www.propulling.com and all of our social media outlets.