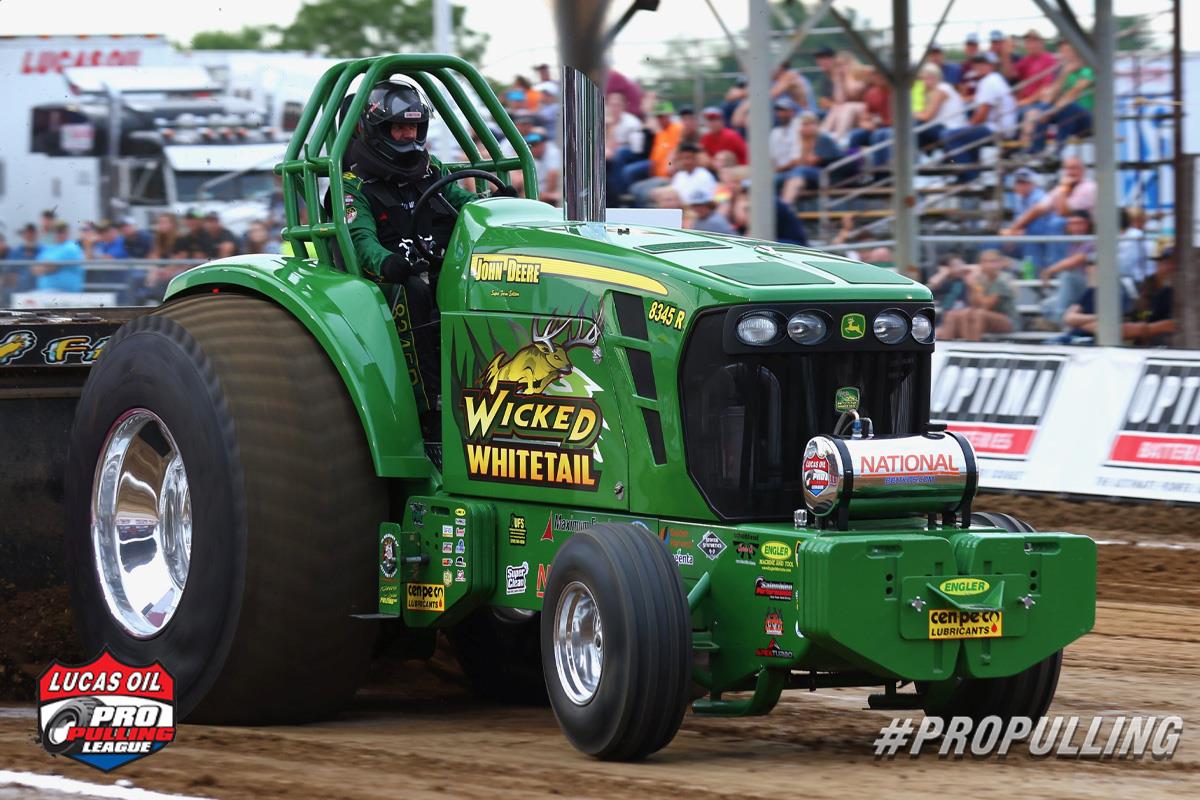 Charlestown, IN (August 1, 2022) – Wrapping up a massive week of pulling action and closing out the month of July was the Effingham County Truck and Tractor Pull in Altamont, Illinois. Three Champions Tour divisions made their final stop for the month in Altamont with a great crowd and a power track awaiting them.

The evening started off with the Big River Steel Super Modified Tractors, facing off with the Protect the Harvest X-Factor of Bungart Motorsports. The Dirtslinger team has been on a tear as of recent and continued their winning ways, this time with Jed Leischner at the helm of the hemi-powered machine Dirtslinger taking the win on the last pass of competition. Keith Long and the Lucas Oil entry finished in second with the class-leading MAVTV of Ricky Long in third out of eight entries.

Super Farm Tractor has been a grab-bag at the top of the class with eight different event winners so far in 2022, solidifying the division’s reputation that on any given night, anyone can win. Jeremy Roberts and the Wicked Whitetail Deere has been a top player in Super Farm on the Champions Tour in recent years and entered Altamont seeking his first win for 2022. Roberts’ run just beyond 329 feet on the second hook of the class stood up against the sixteen pullers that followed him, giving him the win on the evening. Dan Viney and the Crank it Up IH finished second at 326 feet and change with the Just 4 Fun IH of Travis Christ in third. Points leader Josh Miley and the High Maintenan$e CaseIH left Altamont (finishing fifth for the night) with a slim five-point lead on second place point contender Don Slama and the Fast and Furious Deere (finishing fourth in the contest).

Wrapping up the exciting evening in Altamont was a class with lots of local influence, the Optima Batteries Super Modified Two Wheel Drive Truck category. Midway through competition local puller Jeremy Nelson and the Midnight Gambler Dodge stepped up with a run of 334.26. That pass would hold up for the evening where Jason Sullivan and the Corn Burner Dodge finished second at 333.24, just a foot out of first place. Bethany Nelson continued her success from Evansville garnering a third in front of the home county crowd in Altamont piloting the Sweet Revenge Chevy. Jeremy’s win pushed him into a tie for first place points with the Addiction Chevy of Michael White and RJ Simon in the Simon Chevy close behind in third.

Super Farm Tractors will compete next at the Scheid Diesel Extravaganza at Wagler Motorsports Park in Lyons, Indiana on August 26th; Optima Batteries Super Modified Two Wheel Drive Trucks continue their season this coming weekend at the Brown County Fairgrounds in Mt. Sterling, Illinois on August 5th, while the Big River Steel Super Modified Tractors will also appear in Mt. Sterling on the 5th and the following evening on the 6th at the Marion County Fairgrounds in Salem, Illinois.