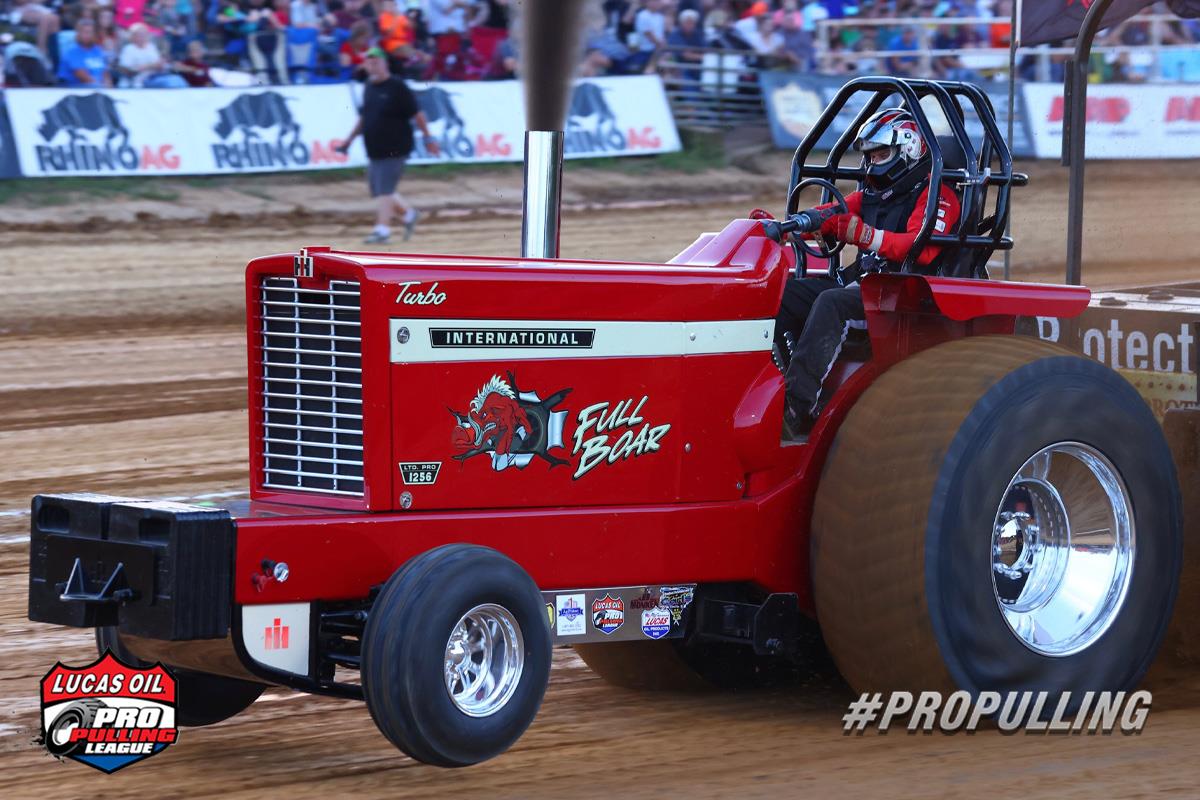 Charlestown, IN (August 1, 2022) – The Vanderburgh County 4H Fair in Evansville, Indiana has a storied history of great pulling competition and a standout fan base that supports the motorsport in droves. The Lucas Oil Pro Pulling League has a extensive background with the fair and delivered seven elite classes on Friday July 29th.

With an intense amount of rain in the days prior to the pull, the Evansville track crew did a phenomenal job of getting the facility into shape for the pull. Showtime for pulling was set for 6pm CDT with opening ceremonies with the Vanderburgh County 4H Horse and Pony Drill Team offering presentation of colors for the National Anthem. The opening ceremonies for 2022 also included a moment of silence and reflection on the memory of Quinton Hartman who passed away in 2021. Hartman was an integral part of the success of the truck and tractor pulling program for the fair and a PPL Champion 95 Limited Pro Stock Tractor competitor.

The pulling action opened on the twin tracks of Evansville with the General Tire Decision Maker on the Grandstand track while the Lowry Protect the Harvest sled handled the infield track.

Super Farm Tractors, pulling on the grandstand track, were out in big numbers at Evansville with twenty entries. Brian Barman and the Hooked Up IH took the win for the night (Barman’s second win for the 2022 season) with Michael Snepp and the 44 Deere in second place. Third went to past champion Shaun Boyd and the Screamin Norwegian CaseIH. Barman’s win tightened up the points race with points leader and defending champ Josh Miley managing a fourth and the second-place points duo of Don Slama and his Fast and Furious Deere in fifth for the evening.

Unlimited Super Stock competition on the infield track saw movement among the top five in points brought on by recent breakage. Jeff Hirt and the Runnin Bare CaseIH were victorious in Evansville and class leader Josh Blackbourn and the Considered Armed and Dangerous-HD CaseIH finished in second. Third went to the Ruttin Deere of Bob Gansemer. Hirt and Gansemer made gains in the points battle as the Extremely Armed and Dangerous CaseIH of Terry Blackbourn fell to breakage in recent action, opening the door for Gansemer for ascend to the second-place points position and Hirt into the third spot.

Following the Unlimited Super Stocks on the infield track were nine Silver Series 95 Limited Pro Stock Tractors. Darin Ratermann and the Full Boar IH made an outstanding pass beyond 317 feet, eclipsing Andrew Hartman who made a stellar run on the International Addiction IH formerly campaigned by Quinton Hartman. The Hardcore Addiction IH of Bradley Hartman was in third for the evening.

Pro Stock Tractor has largely been a story of who could and would get around the three headed monster of “Loud” themed Deere, Brandon Simon-piloted entries from the Simon Sez Motorsports camp. After finishes off the top spot at Norwalk, Ohio and Goshen, Indiana, Simon showed championship form once again with the Loud and Loaded machine in first place in Evansville and the Loud and Heavy entry in second. Darryl Folz guided the legendary Tinker Toy into the third spot for the evening on the grandstand track. .

Optima Batteries Super Modified Two Wheel Drive Truck competitors offered their brand of pulling excitement for the Evansville fans on the infield track. RJ Simon and the Simon Sez Chevy bounced back from a mid-pack finish in Goshen to take the win in Evansville, besting the efforts of former class champion Bethany Nelson and the Sweet Revenge Chevy who finished second. Jeremy Nelson and the Midnight Gambler Dodge continued their uptick in performance with a third in Evansville that furthering his stake for a 2022 championship.

Big River Steel Super Modified Tractors gave the grandstand crowd an up-close and personal dose of the sound that you can “feel” that these multi-engine monsters provide. Jed Leischner had driven the Dirtslinger machine to a win at Norwalk, Ohio; his dad Bill took back the reinsto the Dirtslinger machine in Evansville and didn’t miss a step, edging class leader Ricky Long and the MAVTV machine 328.15 to 321.97. Former class champ Wayne Sullivan and the Optima Batteries Kentuckian soared into the third spot at 296.83.

Finishing off the evening were fifteen Hot Farm Tractors from the Ag Protect 1 Midwest Region. Kaleb Werner and the Rage N Buck Deere scored a nice win with a pass to 311.79, eclipsing the effort Kevin Fleck and the Written in Red IH at 308.65. Darren Bommer and the I Got This IH finished third on the evening.