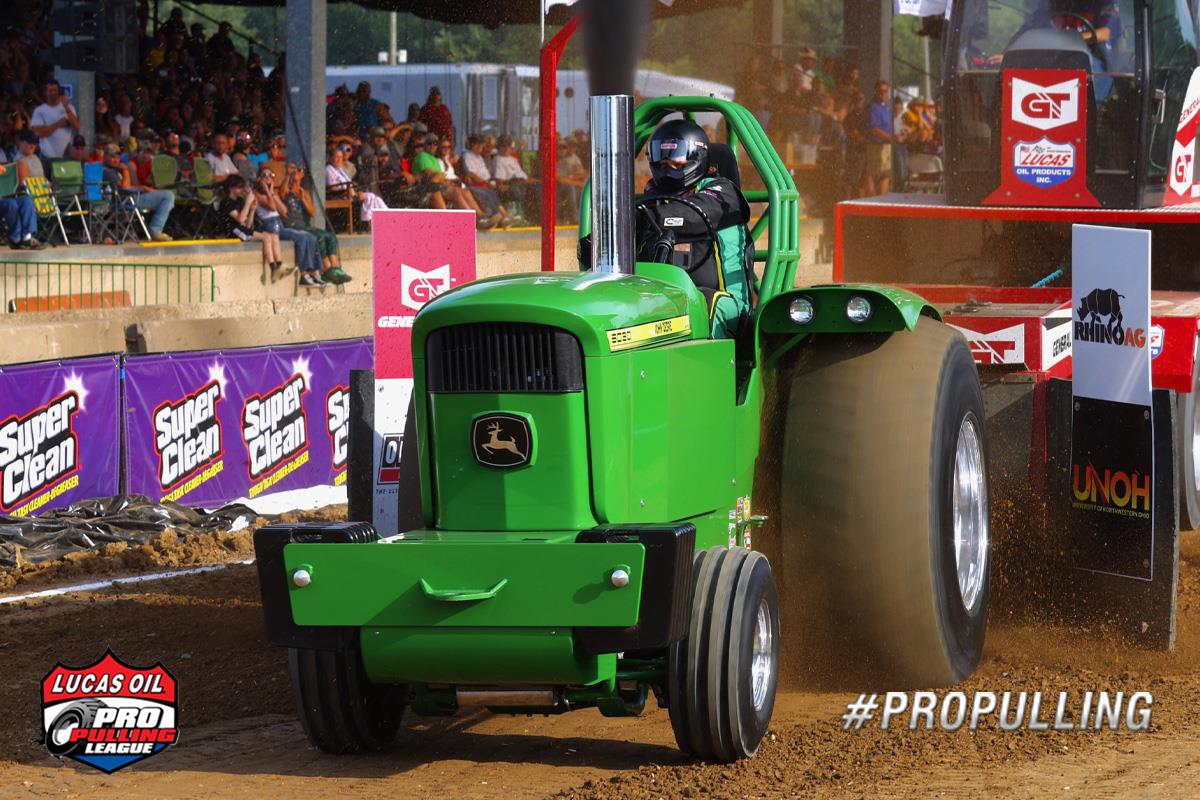 The event added a session of competition for 2022 on the 27th to further enhance their outstanding fair, and anticipation was high for pullers and fans with more competition. The General Tire Decision Maker sled out of the Richard Love stable of machines handled stopping duties for the event.

The first session on the 27th kicked off with a tremendous group of Super Farm Tractors. Nineteen competitors answered the call to compete in Goshen with familiar names at the top of the class. Andy Schwenk and the Running Buck Wild Deere captured the win in the first round of competition, his first Champions Tour win for 2022. Defending class champ Josh Miley finished second on the High Maintenan$e CaseIH with Brian Barman and the Hooked Up IH in the third spot.

Ominous skies had threatened during Super Farm competition and eventually overtook the event with rain canceling the session as the ARP Super Stock Diesel Trucks began their contest, the second class of the evening.

Day two at Goshen began with Silver Series Light Pro Stock Tractors kicking off the midday session. Adam Luhnow and the One Bad Binder kept the best efforts of eight other pullers at bay with the class win J.D. Wiederhold continued his journey among the top pullers in the class with a second place finish on the Bare Necessities Deere with Scott Webb and the Ragin’ Red IH in third.

Super Farm Tractors came returned for the midday session for their second shot at the Goshen track. Kevin Van De Weert collected his first Champions Tour win in Goshen on the Deere named 44 Special-Reloaded followed by the Dime a Dozen CaseIH of Jerry Barrass. Shane Masten and his potent AGCO named the Thumpin Pumpkin kept his bid for a 2022 title alive with a third place finish.

Finishing the session were the Summit Racing Mini Rod Tractors. 2021 class champion Grayson Shelton has been steady with the Sawed Off machine in 2022 but coming into Goshen had not scored his first win of the season. Shelton ended that drought with a win—but by slimmest of margins. While Shelton roared down the track to an outstanding effort of 346.85, Jordan Nelson and the class-leading Loud and Mini machine fell just short of the win at 346.49, a scant four inches behind. Nelson would round out the top three on the Simon Sez Mini at 345.94 with less than a foot separating first and third.

Session three at Goshen brought out the monsters of the midway, among them the sports’ most powerful and heaviest classes.

The ground-pounding Pro Stock Tractors kicks off that final session with nine stout contenders. Justin Wagler, who had been a dominant force in the 95 Limited Pro Stock division for many years, had jumped up to Pro Stock with the latest version of the Real Deere and showed up to Goshen looking to find his first PS win on the all-new machine. Wagler put together a tremendous 314+ foot pass good enough for the win, followed closely behind by class veteran Kevin Masterson and the Tinker Toy Deere. Brandon Simon clinched the third spot for the evening, this time on the Loud and Heavy machine in his stable of three Pro Stocks.

Big River Steel Super Modified Tractors had seven entries with a trio of Kentucky-based machines roaring into the top spot. Keith Long, coming off a great performance at the World Series of Pulling in Norwalk, Ohio, posted the win at 333.17 on the Lucas Oil machine to his brother Ricky’s pass to 312.75 on the MAVTV entry. Wayne Sullivan and the Optima Batteries Kentuckian blasted out to the third position at 302.03.

Twenty-one Optima Batteries Super Modified Two Wheel Drive Trucks offered up an outstanding show. Chaz Fleming scored his first win of 2022 in Goshen in the N 2 Deep Chevrolet, followed up by Tim Beatty and the Sawmill Express Chevy-bodied machine. Russ Nichols and the potent On the Edge Ford was third in Goshen.

Wrapping up the pulling action in Goshen was the ARP Super Stock Diesel Trucks. Ten of the best machines were in action and were led by 2021 class champion Erik Stacey and the SmokinYa HD Chevrolet who posted a run of 325.50. While we normally see Chase Eller in the seat of the Caretaker Dodge, Adam White took the wheel in Goshen and made the most of the opportunity, landing in second at 320.83. Rounding out the top three in Goshen Justin Gearhart and the Cream of the Crop Dodge at 320.34, six inches behind White.

The parade of power from the Lucas Oil Pro Pulling League continues tonight in Evansville, Indiana at the Vanderburgh County 4H Fair and tomorrow night in Altamont, Illinois for the Effingham County Fair pull. Learn more about these and other future events at www.propulling.com!