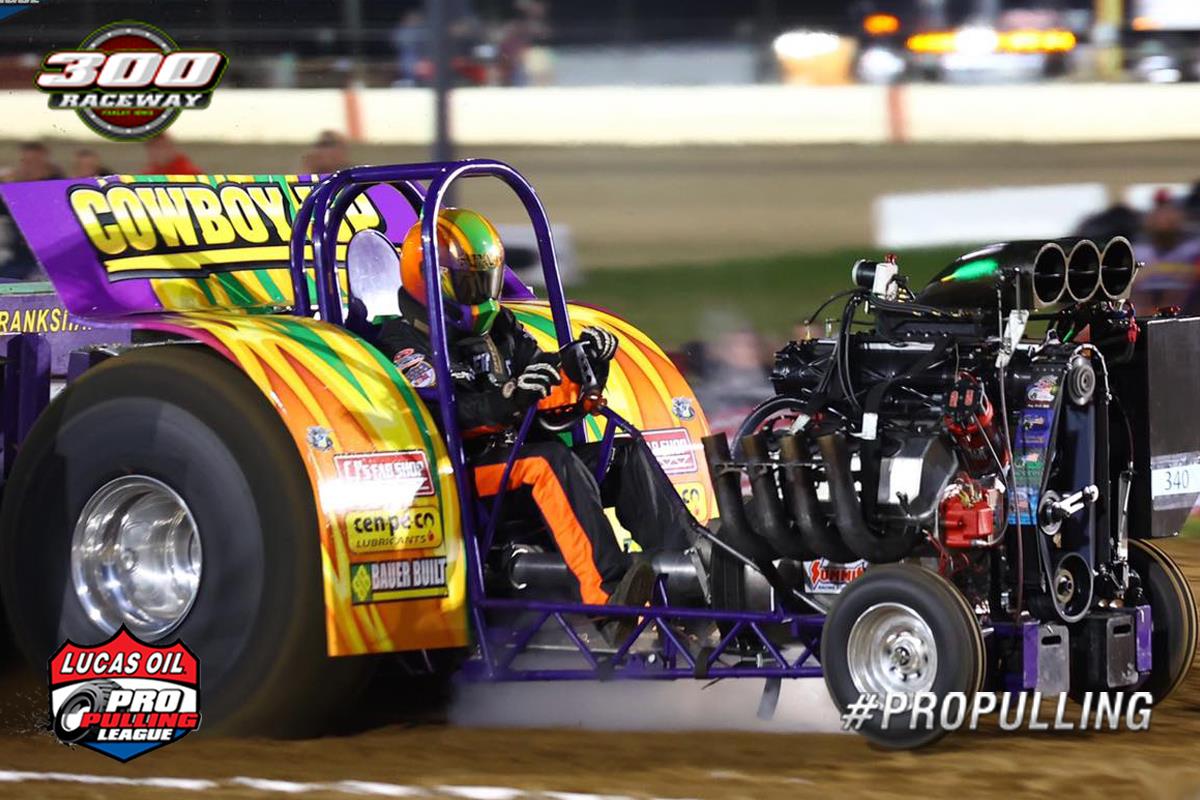 Charlestown, IN (June 13th, 2022) – Pullers from across the nation gathered at the third annual 300 Raceway Farley Nationals in Farley, Iowa this past weekend to the delight of pulling fans in person and via livestream on MAVTV Plus. Five classes from the Champions Tour took their shot at the Jim Miller-prepared twin tracks with the Bauer Ironman sleds in full effect for the battle.

In Summit Racing Mini Rod Tractor competition, Adam Bauer and the Cowboy Up machine roared to win giving Bauer his first-ever Champions Tour win in session one. In session two Abbey Leischner and the Bobcat Jr. showed championship form as they did in 2019 with the win over 24 elite competitors.

ARP Lightweight Super Stocks had a full field in Farley with a pair of pullers that are no strangers to the winners circle in Farley. Marcus Wettleson’s Gunpowder and Lead CaseIH led the pack of 14 machines to the Friday night win while the fourth place tractor from that Friday session, the Armed and Dangerous-Excessive Force CaseIH piloted by Terry Blackbourn, cruised to the Saturday night victory for Team Chizek.

Pro Stock Tractors were in competition at Farley with a record-breaking performance for one team on the weekend. Having won the first two sessions of the season at the GALOT Mule City 300, Brandon Simon and the Loud and Heavy machine were tasked with staying atop the class in front of the hometown crowd in Farley. Simon measured up admirably to the call netting the win in both sessions on his impressive John Deere machine and became the first PPL Champions Tour competitor ever to win four sessions in a row in a season.

Super Farm Tractors were in Farley twenty-strong for both sessions. Session one on Friday was decided on the final hook with Michael Snepp and the 44 John Deere advancing to the winners circle on a 328 foot pass. Saturday’s winner, Shane Masten and the Thumpin Pumpkin AGCO, rebounded from a sub-par Friday night finish to win the class.

A massive field of Optima Batteries Super Modified Two Wheel Drive Trucks faced off in both sessions as the final class each evening. RJ Simon and the Simon Sez Chevy came back after a drop on the last hook in the class to take the win in session one, while Jeremy Nelson and the Midnight Gambler Dodge made massive gains on their Friday performance and scored the Saturday night session two victory.

While most of the classes from the Farley have the week off, the Super Farm Tractor division continues their campaign with two sessions at the fabled Grassy Fork VFD pull in Tampico, Indiana on June 17th and 18th. Pro Stock Tractors, ARP Lightweight Super Stock Tractors and Optima Batteries Super Modified Two Wheel Drive Trucks return to battle at the popular Rumble by the Refuge event in Mound City, Missouri on June 24th and 25th. Summit Racing Mini Rods will return to action on July 16th at the prestigious America’s Pull in Henry, Illinois.

Want to replay the action? MAVTV has you covered! With a monthly or yearly subscription to MAVTV, you can view events live or at your convenience across all of the motorsports platforms in the Lucas Oil family…get your subscription today at www.MAVTV.com!