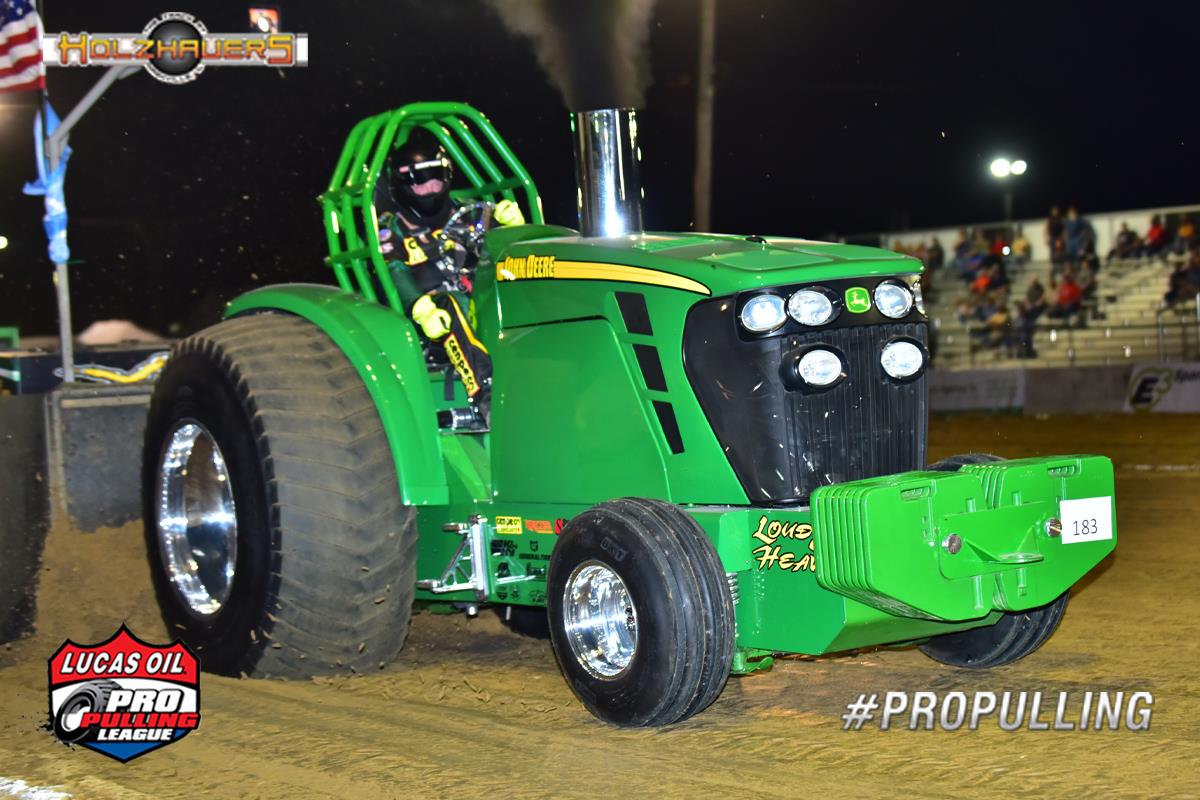 Charlestown, IN (June 8th, 2022) – The Track at Holzhauers in Nashville, Illinois was the opening stage for several classes in the Lucas Oil Pro Pulling League on the Champions Tour, Champion Seed Western Series, and Silver Series with the Southern Illinois Showdown on June 3rd and 4th. Six elite classes on the twin tracks unleashed two evenings of pulling excitement for the fans in attendance.

Keeping the machines in check for both sessions were the Rhino Ag and Protect the Harvest X-Factor sleds. The Friday session of PPL action started with the Light Limited Super Stock class, where Josie Otto piloted her Blue Power Express New Holland to the win in a class of five on the first hook. ARP Lightweight Super Stock tractors had a big presence with 18 entries. Terry Blackbourn and the Considered Armed and Dangerous CaseIH was in a familiar spot at the top of the class with a 346 foot pass for the win on the 15th hook in the class. 95 Limited Pro Stocks were in Nashville vying for Western Series and Silver Series points. The 2021 Silver Series class champion machine, the International Addiction of the late Quinton Hartmann was guided to victory by Andrew Hartmann on a mid-pack hook. The tough Pro Stock tractor division had a field of seven machines and class champion Brandon Simon picked up where he left 2021 off with the win on the Loud and Heavy Deere. 85 Limited Pro Stocks were also in action; that class was decided on the final hook with Darren Horstmeier and the Night Moves 66-series IH taking the win. Rounding out the evening was an impressive group of Pro Stock Diesel Trucks that saw former points champ Matt Penn and the Penn Farms Dodge at the top of the podium in a class of six.

The second session on the evening of June 4th continued the excitement from session one. The Light Limited Super Stock class had a CaseIH-bodied machine at the top with Ben Klott on the New Generation Harvester in the winner’s circle. ARP Lightweight Super Stocks featured Terry Blackbourn again at the top of the class but piloting the Team Chizek Armed and Dangerous-Excessive Force CaseIH to the win. Andrew Hartman continued his domination of the 95 Limited Pro Stock class on the International Addiction IH and Brandon Simon doubled up on the Loud and Heavy Deere in Pro Stock. Pro Stock Diesel Truck had a first-time winner with The Rumor Chevrolet guided by Cole Faber taking top honors, and Kenny Kozuszek and the Ridin’ Dirty IH picked up the 85 Limited Pro Stock victory.