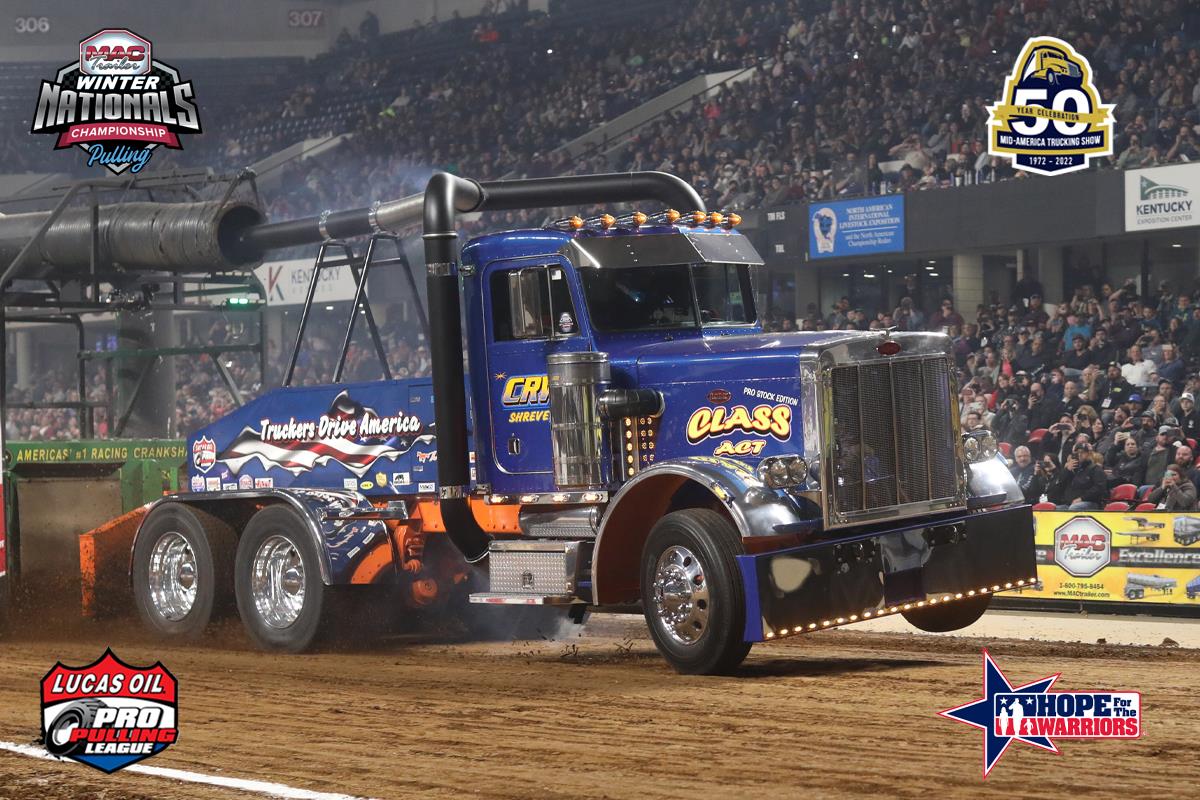 Charlestown, IN (March 29, 2022) – Developed in a short timeframe and coupled with high expectations, the MAC Trailer Winter Nationals held during the Mid-America Trucking Show in Louisville, Kentucky on March 26th delivered a night full of high-flying competition with four classes on display in a parade of pulling power.

While preparations were ongoing in the weeks prior to the event, the fabled Championship Tractor Pull red clay started going into Freedom Hall at 2am Saturday morning under the watchful eye of Dan Cristiani and his team of skilled track builders. While the dirt went in as it does for the National Farm Machinery Show, the “script was flipped” as it were, with the starting position changed with pullers now shooting for the door instead of a sand pile. By 5pm showtime, the track was in fantastic condition and ready for battle with a great crowd of fans witnessing the sports’ elite competitors from the pulling world. 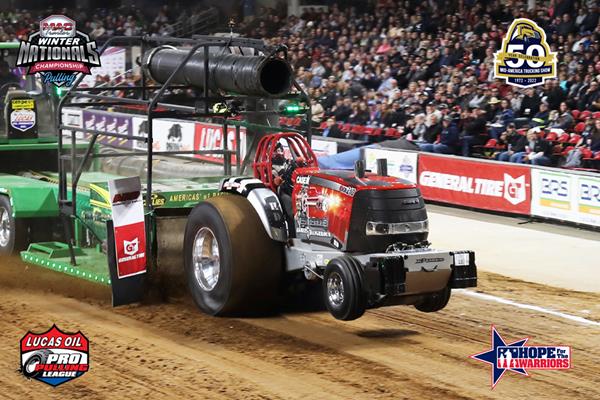 After a reverent, reflective, and respectful opening ceremonies that honored the men and women in service to our nation, the first of four classes to vie for a $10,000 payday courtesy of Mike Conny and MAC Trailer hit the track. Unlimited Super Stocks answered that opening call with eight entries squaring off with the Ironman Sled of Vaughn Bauer. The first blast down the track proved to be the winner as Terry Blackbourn took the win on the Considered Armed and Dangerous-HD CaseIH. Blackbourn would take second as well on the Extremely Armed and Dangerous CaseIH, locking up the top two spots for the Team Chizek stable, and third went to Brent Payne on the GALOT 2 AGCO from the GALOT Motorsports camp. 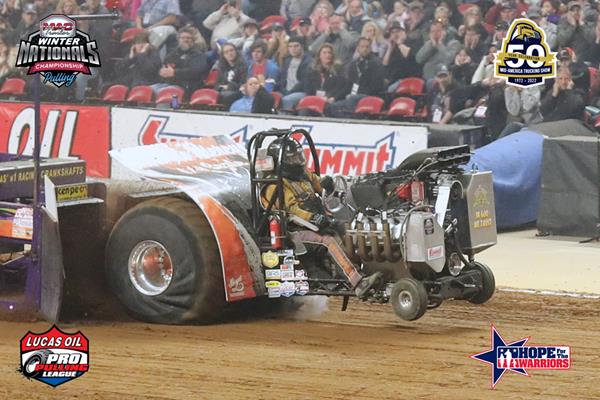 The MAC Trailer Winter Nationals also heralded the return of the Summit Racing Mini Rod division to Freedom Hall after being absent since 1994. Fourteen competitors did battle with the Ironboy sled and delivered an outstanding show that was settled in a pulloff. Bruce Slagh and the Show No Mercy – ¼ Scale would take the win in that pulloff duel with Dillon Bunnage who piloted the Phoenix machine into second place. Adam Koester would claim third on the Walk the Line Mini. 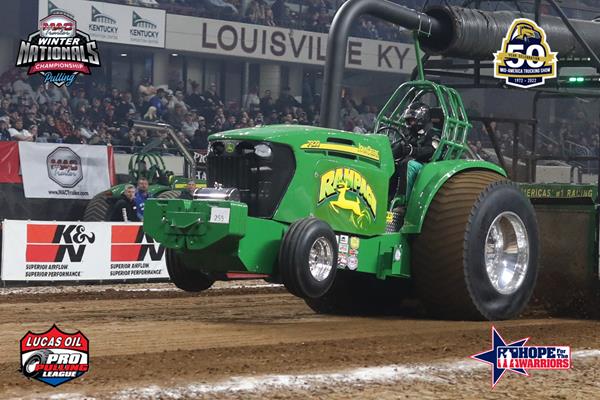 The thundering Pro Stock Tractors came into Freedom Hall twelve-strong and the $10,000 payday upping the intensity of competition. With experience on the Freedom Hall red clay across three decades, Danny Schmucker and the Rampage John Deere delivered a decisive winning pass on the fifth hook of the competition. Jason Svonavec and the Bootlegger Deere roared into the second spot while Peter Norton and the Money on Black Deere finished third.

Rounding out the evening was the MAC Trailer Hot Rod Semis, debuting in competition in Freedom Hall after pulling in exhibition in years past. All six machines in competition gave the crowd their money’s worth with the roar and thunder that can only be provided by these 10 ton machines. Reigning PPL Champions Tour points champion Chris Wood and his Class Act Peterbilt (in our lead photo) lived up to his billing with the class win, seven feet ahead of the second place Hillbilly Deluxe Peterbilt of Spencer Rook. Jeff Lautanen piloted the Moody Blue Peterbilt into the third spot.

While the action on the track was in full focus, proceeds from ticket sales went for a greater cause, the Hope for the Warriors charity, geared toward serving those in need in the post-9/11 warrior community.

“We were pleased with the event and it took a host of people to make it work so well,” commented John Mears, PPL Series Co-Director. “Mike Conny and MAC Trailer were crucial with their support along with the Kentucky Venues management team, MATS Event Director Toby Young, and Dan Cristiani and his team.”

PPL Series Co-Director Kristi Asher added, “This was a great opportunity to showcase pulling to a new audience from the truck show attendees who enjoy motorsports. We hope to see them back at pulling events in the 2022 season. We are appreciative to all the partners in this event that made it happen!”

MAVTV will replay of this stellar event, check www.propulling.com for air dates and times.